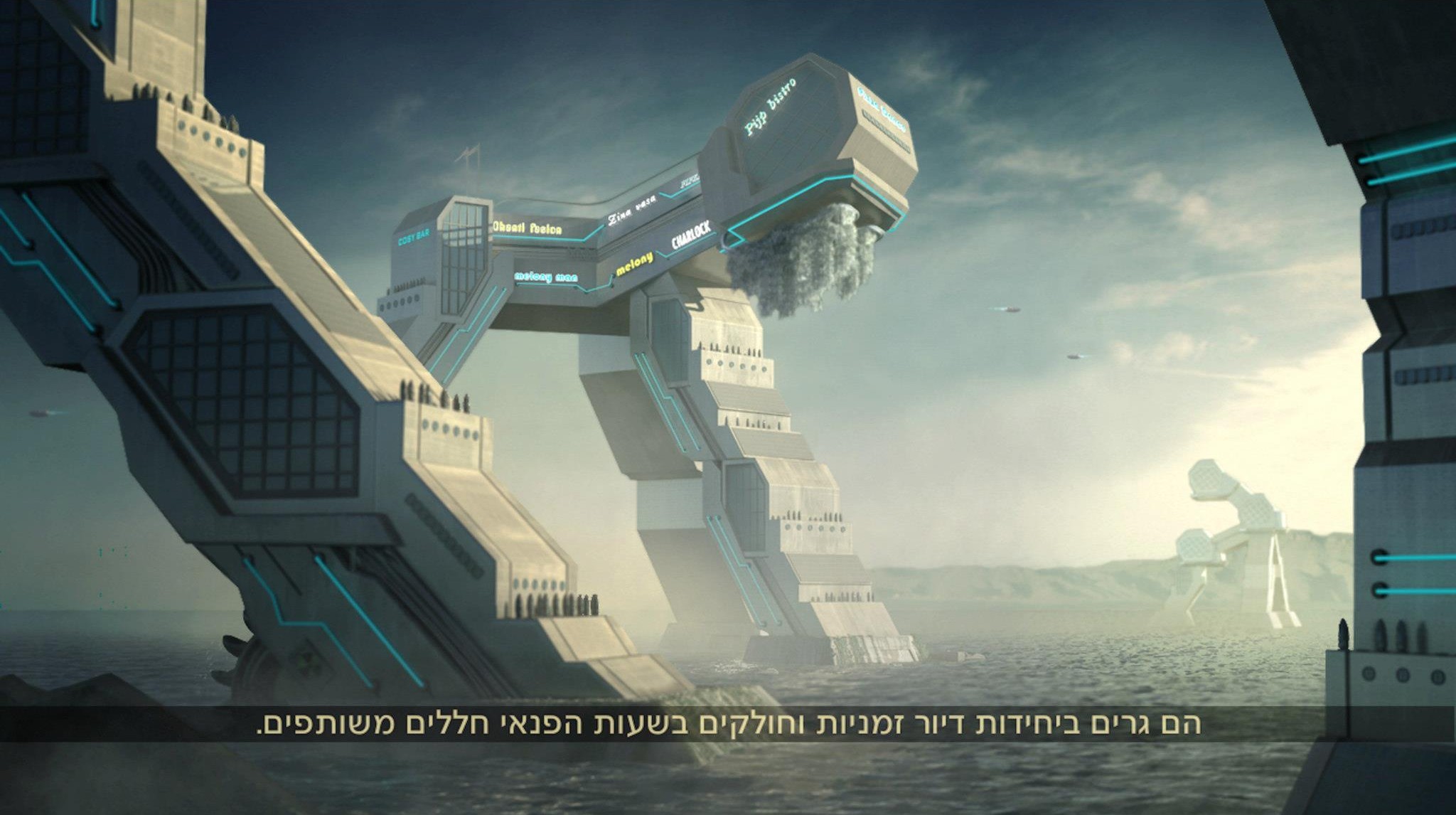 Your chance to win over 40,000 NIS in awards, and be celebrated by the Tel Aviv municipality!

The Israeli Animation College in cooperation with the Municipality of Tel-Aviv, Utopia Festival , WakingApp and DLD Tel-Aviv Innovation Festival, invite the public to send artwork for the City of the Future Competition.

The winning works will be printed on billboards which will be hang along Rothschild Boulevard in Tel-Aviv and will make use of augmented reality. Awards and Scholarships totaling NIS 40,000 will be awarded to the winners, who will be selected by a professional jury.

Imagine how Tel-Aviv would look like in the far future. Now imagine that you're walking on Rothschild Boulevard, watching your artwork through your smartphone or tablet and seeing additional layered details you have created, whether static or animated, on top of the actual printed billboard! It can be anything you choose, from textual infographics to flying spacecrafts in the city sky!!!

How does it work?
WakingApp is a new augmented reality app (AR) which allows feeding and layering of images or movies. When you print the first picture and look at it through a smartphone, the application detects it and places the second image or the film on top of  the designated frame.

Can I see a demo?
Sure! Even two. Here is a video that shows how it works:

You can also install WakingApp on Android or IOS and see for yourself. After installing the app, launch it in your smartphone, press the big button on the left and then point the camera at the image that lies just up here (under the page title). Wait a few seconds and see the magic in action!

What should I do?
Create one image at a technique you of your choosing, and save it as a JPG.
The image should address the issue of "Future Tel-Aviv" in any interpretation you want to give it.
Now take that image, add more details, static or animated, and save as JPG or QuickTime.
Send us the two files untilSeptember 6 2014 at 8 PM Israeli time.
Scroll down for further details on the format and submission rules.

What's in it for you?
The works selected by the jury panel will be printed and exhibited in a hanged exhibition in Rothschild Boulevard during the DLD Tel-AVIV Innovation Week, 13-20 September. Additionally, you can win prizes and scholarships totaling in NIS 40,000!

Who can participate?
The competition is open to everyone, without any restrictions. Students, professionals, artists and anyone interested, regardless of religion, race, gender, ethnicity, country or age.

First place, by jury selection: A scholarship* worth NIS 7000 for a course at the Israeli Animation College AND a Parrot AR.Drone HD professional flying camcorder, controlled by a smartphone or tablet AND a pair of VIP tickets to Utopia Festival** AND one free access to the DLD Summit**.

DLD is Israel's largest innovation conference, a Main focal point in the global digital network by the same name, founded and directed the entrepreneur and investor Yossi Vardi and the European media mogul Hubert Burda.
Utopia is the Tel-Aviv International for science-fiction. Exhibitions, conferences and talks on science, imagination and the future, alongside extraordinary cinema.

Submission format:
The works should be submitted until September 6 2014 at 8 PM Israeli time.
The works should be submitted by email to:
iac.future@gmail.com
The works must be submitted in JPG (if a still frame) or MOV or MP4 format (if a video).
File names must be "artist name-art name-technique".
For example: "Creation_of_the_World-Moshe_Cohen-Digital_Painting_3".
Frame width must be 6 or 3 meters.
Frame height must be 1.5 meters.
The resolution should be 72DPI.
Size of image files should be up to 1MB.
Size of video files should be up to 5MB.
The two files should be the same size and resolution.
You can add a layer of the picture instead of video and/or images/buttons/visual elements in PNG format which will cover, wrap or be integrated into the target. JPG or PNG format recommended size is up to 100K per addition. (You can combine several photos together).
You can also enter the platform and create your own augmented reality by uploading the above files directly into the system and testing them using WakingApp.

Submission Rules:
Every artist can submit up to 3 (three) works.
The image should address the issue of "Future Tel-Aviv" in any interpretation you want to give it.
You can submit a work in any technique: animation, drawing by hand or computer, 3D frame, digital sculpture, etc.
You can combine techniques, process frames and use any software.
You cannot submit photography or processed photography.
You cannot submit works that make use of copyrighted materials.
Any infringement of copyright will be the sole responsibility of the submitter.
It is allowed to submit works created in another framework and at another time, regardless of the competition.
Works will be valued by the following parameters: Originality, creativity, design, personal style, ambience, innovation and performance.
Participation in the competition in accordance with the regulations at the bottom of this page.

Jury:
Asaf Zamir – Deputy Mayor, Tel-Aviv-Jaffa municipality. Chairman of the education committee and Leader of the "Rov Ha'ir" party, the young adults list of Tel-Aviv. Promoted issues and projects such as young art, street art, the year of art, affordable housing, young population centers, alternative transportation and more.
Yanir Tirosh – senior 3D artist. Worked in Snowball studios, Shortcut-Playground the animation lab. Teaches 3D and heads the Zbrush course in IAC.
Menashe Morobosa – 3D artist. Head of 3D at Creative House company. Served as a 2d manager at Crew972 (where he worked on series such as "Looney Tunes") and as technical director at the Animation Lab Studio. Teaches 3D in IAC. Doron Meir – animation director, writer and illustrator working in international projects such as the animated features "Asterix and the Vikings" and "The Journey to the Minmicks Star", "Road Runner" series, "Hitman" computer games series and more. Runs the site CreativityWise.com dealing with the study of the creative process. A teacher of animation at IAC.
Yaniv Shimoni – illustrator and designer. Winner of the Israel Museum award for illustration of children's books. Illustrator for magazines, books, commercials and television. Designs characters and backgrounds for animation films. Art director of the animated film "The Journey to the Minmicks Star." Worked in the UK on the "Judge Dredd" comics series. Teaches concept design at IAC.
Sagi Rechter – architect and concept designer, founder of Hyuli Studio for multidisciplinary design. Worked in animation studios such as Studio Pitchi poy and Crew 972. Teaches concept design at IAC.
Vera Vakrat – graphic designer, illustrator and concept artist. Designed commercials, games, corporate films, packaging graphics, TV programs titles, user interfaces, images and backgrounds. BA in graphic design. Teaches digital illustration at IAC.
Amir Green – animator and effects artist. Managed teams in huge productions internationally and locally. Worked on films such as Hellboy (1+2), 300, Watchmen, Surf's Up, V For Vendetta, and computer games Deus Ex and Brink. Teaches visual effects at IAC.
Premshay Hermon – Utopia Festival producer, a multi-disciplinary artist. Served as artistic director of the "Activism Festival", initiated "Cannons and Muses" – a series of projects and exhibitions around the world integrating new technologies. Formerly a teacher of photography and stop-motion.

Rules:
The competition is conducted in accordance with regulations of the college.
The Israeli Animation College may change the conditions of the competition, including submission date, jury list and prizes.
Copyright on the submitted works will remain in full by the submitters. However, the Israeli animation college can present the works online, in print, television or any other media, and will be able to transfer them for display at a third party, while noting Author name.
A work whichi will violate copyright will be removed from the competition. The submitter will compensate the Israeli Animation College for any damage incurred directly or indirectly due to copyright infringement.
* No double discounts and/or scholarships. The scholarship is conditional upon accepting the student to the college (subjected to a creativity test, a personal interview and a submitted portfolio). Scholarship will not be granted retroactively (for people already enrolled in the college). The scholarship is individual and is not transferable. Receiving the scholarship is conditional to the opening of the course. The scholarship cannot be converted into a financial reward or otherwise. The scholarship is intended for full length tracks of study lasting 10 months or more. Short courses can receive a scholarship of up to 50% of the full price of the course. The scholarship is exercisable until 31/12/2015. IAC courses are conducted in Hebrew, in Tel-Aviv, Israel.
** The tickets are the gift of the Utopia Festival and in their responsibility.
The artwork above was created by Shiri Blumenthal, a college graduate which participated in the contest "New Worlds".